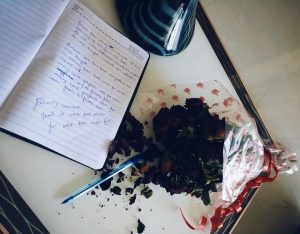 At first, she thought it’s because she believes in second chances; in the idea of timing; that nothing is ever impossible. Then she thought maybe she has become blind with optimism. Nonsense hope. That if only she did this, or she did that, things would finally fall into place. She was clinging to hope with no foundations. She was holding on to the last string of hope until it was too late. Maybe it’s because she thought giving up would be losing and losing isn’t something she can handle well. She wanted to win. She always wanted to win. Her opponent was herself. She set unrealistic expectations for herself and life was tirelessly trying not to let herself down. So, she didn’t want to end it, just so she could prove herself she can make anything, and everything work out. She thought clinging to the edge of the cliff is better than feeling like a failure.